All Aboard This Crazy Beautiful Mixed Up Mess We Call Life 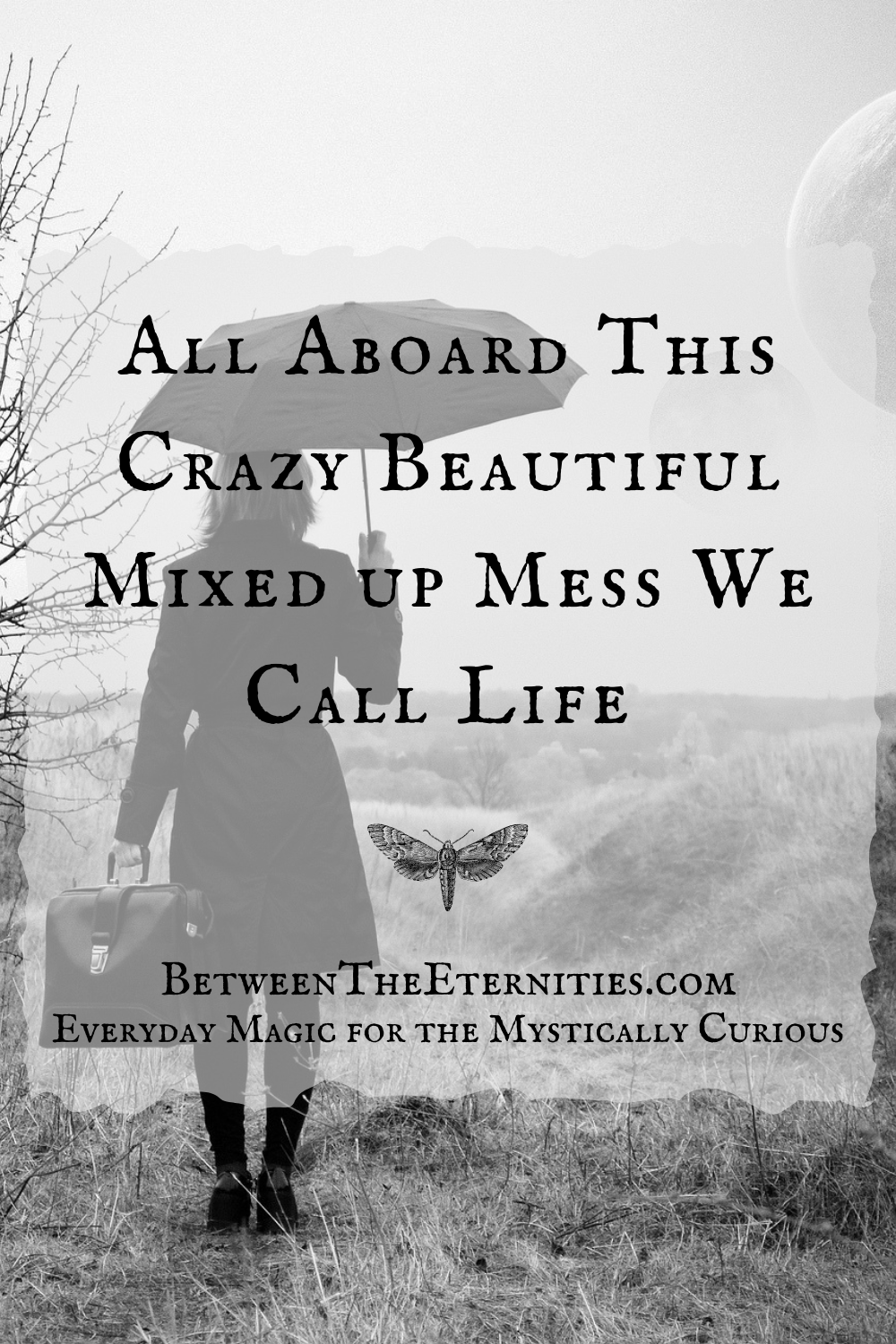 Is it Lame to Say That's Lame?

When I first decided I wanted to start blogging, the issue I wanted to focus on was pretty much a no-brainer for me.  Figuring out exactly how to approach it took a little more thought, however.

I knew I wanted to help people figure out how to cultivate their version of personal peace and calm (through a bit of magical moxie) in a world where we are hyper-connected, hyper-busy, and hyper-stressed.

It’s a topic that’s pretty near and dear to my heart because I have struggled with this as well, and it can be debilitating.

At first, I dreamed of crafting posts filled with beautiful, thoughtful, flowy words of inspiration and guidance, words that would bring peace and calm and a sigh of relief to those like myself who are spread entirely too thin in a world that expects way too much from us.

Then, reality snuck up and bit me on the rear and I said to myself, “Self, I’m just gonna stop you right there because that sounds LAAAME.” (Do people still say “That’s lame”?  Maybe I sound lame for saying “That’s lame.”)

In any case, whether it’s lame to say that was lame,  I was right.

Pretty words and super duper positive inspirational quotes might be perfect for some, but not really for me.

Honestly, trying to write that way would ring hollow with people because it’s not my personality.  My personality is more snark and humor than sweet and earnest.

I mean, for me, sickly sweet just doesn’t cut it when I feel like my life is a crap-show that’s about to go the way of Mount Vesuvius on me at any moment.   Poking fun at the realities of this three-ring circus we call life is what helps to lighten my load.

They do say that laughter is the best medicine, sooooooo….

I don’t like to wallow in my misery, but I also tire of pretending that misery isn’t real by constantly putting on a happy plastic face for the benefit of those around me.

Don’t get me wrong, I firmly believe in the power of our thoughts and attitudes and the impact our inner world has on our outer one in regard to creating our own reality… but part of reality is understanding that it’s okay to not be “on” 24/7/365 no matter what.

I don’t care if you have all the money in the world and a home on Martha’s Vineyard, if you’re the queen of someone’s double-wide trailer (obscure Sammy Kershaw reference there), or smack in the middle at the middle-class suburbia needle on this “Life-Sucks-This-Much” o’meter, we all have crap in our lives that we have to deal with.

Some days feel like they could easily be narrated by a disembodied voice from the sky proclaiming “Today’s events brought to you by the letters W, T, and F….”.

On days like that, I want to hide at home on my couch with a big ol’ bucket of popcorn and just watch the trainwreck unfold. Don’t you?

I mean, amiright… or amiright?

Ready to weave a little magic into your week? Sign up below for a bit of mystical enchantment & spiritual inspiration. My trusty crystal ball hints that you may even receive the occasional synchronistic dispatch from the Universe.... straight to your inbox.

We All Know Life Isn't Perfect, Why Pretend Otherwise?

Social media is full of people putting on a smiling face in front of the camera.

We see them posed in their perfect Instagram-ready outfits in their immaculate homes with 2.5 children, a dog, and a mate that’s a fitness model, but I guarantee you that plenty of those people are faking it for the camera.

Does that sound harsh? Maybe, but honestly, in a world full of people conditioned to use social media likes and shares as some sort of twisted barometer of their worth, we are starving for some real talk about just how hard life can be.

Seeing staged perfection day in and day out can wither your soul when you look around your own life.

It’s not a fair comparison when what we’re comparing ourselves to is often pure fantasy, please remember that.  Also never forget that you have no idea what’s just outside the frame of that “perfect” photo.

I'm Stressed! You're Stressed! We're All Stressed Out!

It has unfortunately become the norm to be stressed to the nth degree.

To meet yourself coming and going.

To forget to pick up your little whippersnapper from school because you were caught late at work (again) due to a chain of events you had zero control over.

A chain of events which in turn led to you having to grab pizza on the way home for the second (or third) time this week.

It’s understandable, considering you have zero idea what to feed your family tonight since you forgot (again) to take the chicken out of the freezer this morning. (I may or may not resemble this in real life).

Look. Here’s the truth of the matter:   The perfect life with the perfect job and perfect mate in the perfect house with a bank account overflowing with wealth is not reality.

Does it happen?  Of course it does!  And I am thrilled for those who are living that reality.  But, for most of us,  reality is the nitty-gritty of too-full schedules, too many bills and not enough money, not enough time to nurture ourselves and our relationships, along with moms and dads and single folks alike working multiple jobs to make ends meet.

That’s reality. It’s what “normal” really is. The sad fact that this is “normal” for so many of us is disturbing and, honestly, heart-wrenching. I’m over it. I’m sure you are too.

Life can be a soul-sucking beotch, but I’m glad you’ve found your way here because we’re going to work on making the best of it.  I daresay we can even make it downright enjoyable with a little magic and mystery to spark some excitement in your day-to-day life, magic that has been missing for sooooooo long.

Now, settle in with a cuppa something de-lish and explore my little spiritual journey pitstop out here among the tangled up threads of the worldwide web.

Our Most Recent Posts